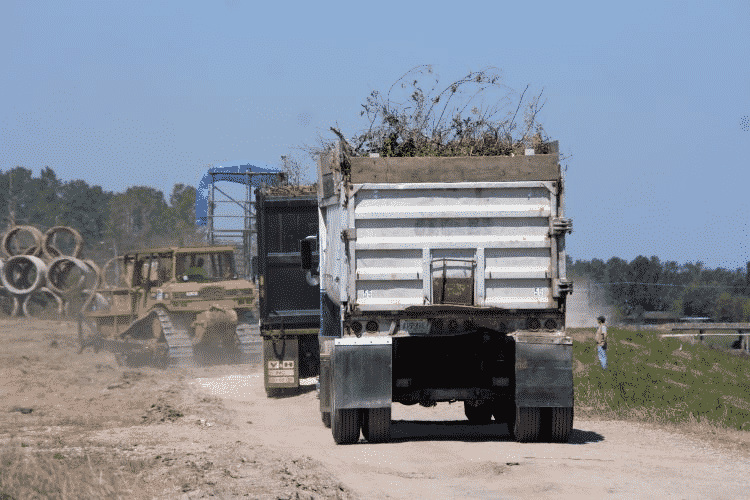 Every day, there are many illegal immigrants that try to make their way into the United States by way of Laredo. It’s one of the busiest ports of entry between the country and Mexico, and there have been a lot of creative ways in which immigrants are brought in. It seems that there’s a new method on a daily basis, and one of the more interesting ones has been found recently in the form of a dump truck that has a hidden compartment.

An anonymous caller got a hold of the Laredo Police one morning, saying to be on the lookout for a dump truck. It had been disabled on the side of the road, and the LPD had a wrecker go out there to take a look. The wrecker operator was surprised when he discovered what was inside, with a lot of loud banging trying to get his attention. The police and fire crews were brought out, just to find that there were three dozen immigrants trapped underneath the gravel in a hidden compartment.

Officer Emanuel Diaz said that the backhoe was taken off, and dirt was removed, allowing the immigrants to get out of the compartment. It was an interesting setup that looked like it took a lot of time, but it wasn’t exactly what you’d call safe, especially since the people couldn’t get out of the truck themselves. Customs and Border Protection took the immigrants in, saying “Make no mistake – the criminal organizations and cartels have no concern for the wellbeing of the people they smuggle across the border.”

Smugglers have gotten very creative when they bring people across the border, and there have been instances where the safety of those people was not a high priority. There have been many incidents in which rigged compartments like the one in the dump truck have resulted in severe injuries and even death.

It wasn’t clear what charges the people within the dump truck were facing when they were brought out, if any at all. Still, it remains one of the biggest and most elaborate ways in which immigrants have been brought through Laredo in many years.